NEWS DETAIL
You can learn more about our company's lastest news and events in there.
You are here: Home » News » Industry News » Hydraulic system of hot press 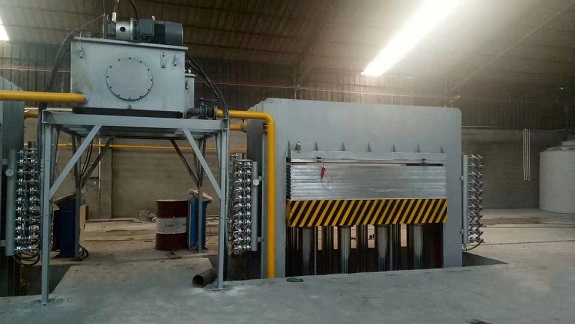 The plywood hot press is one of the main equipment in the plywood production process. It is composed of the hot press body, the control drive part (hydraulic system and electric control system) and the heating system.

The plywood hot press is one of the main equipment in the plywood production process. It is used to hot press and glue the slab after the glue combination. Different types of plywood have different requirements for the performance of the press: ordinary plywood, aviation The pressure required for the manufacture of plywood, plastic veneer, wood-laminated plastic board, and ship plywood is increasing. The plywood hot press is divided into two types according to the operation mode: periodic and continuous. The most commonly used domestically is the periodic multilayer hot press. It consists of three parts: the main body of the hot press, the control drive part (hydraulic system and electric control system), and the heating system.

The hydraulic system of the hot press machine has two operating requirements: applying pressure to the workpiece and driving the hot plate to end a specific movement. Quick closing and stability of pressure holding are important goals for judging the function of the hydraulic system.

Because the heating and curing of the glue during the veneer should end in the holding pressure stage, the fast closing speed is beneficial to the process and power. On the one hand, it can reduce the heating of the slab under non-pressure and prevent excessive water loss on the surface of the slab. Causing warpage, it also prevents the pre-curing of the glue and reduces the quality of the veneer; on the other hand, it can shorten the auxiliary time and the productivity of the traveling press. In order to make the opening and closing of the plywood hot press machine stable, mechanical synchronization equipment or hydraulic system may be used to maintain synchronization.

The hydraulic cylinder is the central part of the hydraulic system. Now most wood processing presses use plunger hydraulic cylinders. Large-diameter cylinder plungers are mostly made of alloy casting, which is characterized by high hardness, thick hardness layer, scratch resistance, and better performance than carbon steel heat-treated plungers; small-diameter cylinder plungers are mainly made of carbon steel heat-treated and plated with hard chromium. , The surface hardness layer is thin.

Because hot presses generally require fast opening and closing speeds and accept impact pressure, it is necessary to choose higher-strength materials for the cylinder body. For general hydraulic cylinders with small diameters and long strokes, seamless thick-walled steel pipes can be used. For some demanding cylinders, cast or cast cylinders can be used.

Generally, the working surface of the hot press for wood processing and furniture production is relatively large. In order to make the pressure spread evenly, and considering the rationality of the structure, most of the multi-cylinder structures are used.

There are not many problems in the production of the hot press itself, but a large part of it lies in the hydraulic system, such as oil leakage and inability to maintain pressure. Many common sense and requirements about hydraulic system can not be described here, but they should be taken seriously when selecting them.