NEWS DETAIL
You can learn more about our company's lastest news and events in there.
You are here: Home » News » Relationship between slab moisture content and temperature of hot press

Relationship between slab moisture content and temperature of hot press 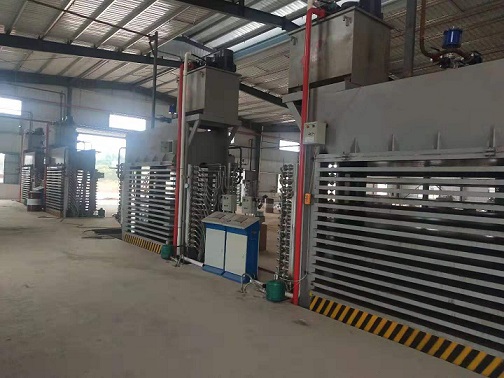 The water content of the slab before hot press comes from three aspects. First of all, after veneer drying, it is absolutely dry according to the requirements of the process, and still maintains a certain amount of moisture in the material. The moisture content of dry shavings and fibers is generally 2%-5%, and the moisture content of veneer is generally 8%-10%. If powder adhesive is used, a higher water content should be used. In this way, it is beneficial to keep the resin glue layer when mixing glue.

The third source of moisture in the slab comes from the polycondensation reaction when the resin glue is cured. The resin glue undergoes polycondensation to produce a portion of water. According to reports, urea-formaldehyde resin glue increases solid resin by 6%, which can increase the slab moisture content by 0.9%. In any gluing operation, the excess water content can be kept in the glue between the two pieces of wood. The average moisture content of the slab is usually controlled at 6% ~ 15%. Excessively high water content should prolong the hot pressing time: while the water content is too low, problems may occur when the press is closed, and the plate thickness cannot meet the requirements.

Different raw materials also have an effect on heat and moisture transfer. The relationship between heat and moisture transfer in the slab of two different shavings. When using granular wood shavings, if the water content increases, the time for the slab core layer temperature to start rising is slightly shortened, and the temperature of the core layer is kept constant, the water becomes steam, and the period of time when it evaporates from the slab has a great influence. Once the temperature of the core layer reaches the boiling point, all the heat will be transferred to this part, which is used to evaporate the remaining water. If there is a large amount of water, it will take a long time to evaporate these waters. When there is no moisture in the slab, the temperature curve is the same as the general heating curve.

All particleboards made of flake shavings have difficulty moving water. When the water content of this kind of slab is high, after the core layer reaches the boiling point, water vapor is not easy to come out, the steam increases, and the pressure also increases, so that the boiling point of water is raised. The steam pressure continues to increase until the steam pressure is sufficient to vaporize the moisture, and the moisture is reduced after evaporation. As a result of the reduction in steam pressure, the temperature drops to nearly 100°C, and the temperature rises again until the end of the constant temperature period.

The above is the relationship between the moisture content of the slab and the hot pressing temperature during hot pressing. I hope it will help you. If you have any questions about plywood machines, you can contact us, we will provide a complete set of plywood production solutions.