NEWS DETAIL
You can learn more about our company's lastest news and events in there.
You are here: Home » News » Industry News » The three elements of the hot press-the role of temperature

The three elements of the hot press-the role of temperature 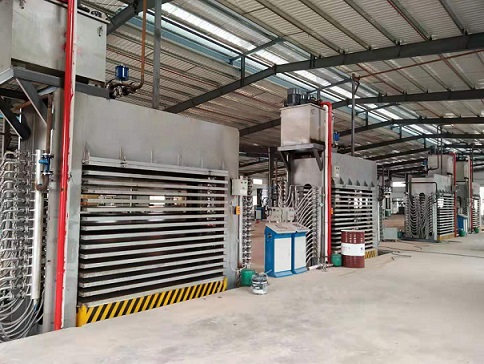 In the production process of artificial board, the slab is sent to a hot press for heating and pressurization, and maintained for a certain period of time, so that the adhesive in the slab solidifies into the processing process of the board. This process is basically the final process that determines the inherent performance of the wood-based panel product. The correct hot pressing process and reasonable equipment selection ensure the quantity and quality of products. To understand the hot press, we need to understand the basic principles of some hot presses.

We first understand the role of the temperature of the hot press.

The selection of hot pressing temperature should mainly consider factors such as the type of adhesive patch, board type, equipment capability tree type, slab moisture content and board thickness.

When the plywood reaches the specified bonding strength, it is not appropriate to choose a higher temperature. The higher the temperature, the higher the water vapor pressure in the board, and the layered veneer is prone to process defects such as bubbling due to hindering the migration of water, and the temperature inside the board is difficult to release during the stacking process, resulting in the heat of the adhesive layer. Decomposition; the slab moisture content of plywood is also slightly higher than particle board and medium density fiberboard, high temperature is easy to cause deformation of the board; from the point of output rate, the production of plywood is expected to have less plastic deformation; for trees with large acid buffer capacity , Like poplar,

For new particleboard or fiberboard, hot presses generally use higher temperatures. For single-layer hot presses, hot press time is particularly important. The heat of the hot press can also be supplemented by the heat released from the polycondensation reaction where the adhesive is cured. According to reports, the heat released by polycondensation in the reaction is up to 20% of the total heat, usually 10% to 15%. In the early days of particle board development, it was pressed at low temperature for a long time. Later, the new type of adhesive required high temperature heating, the temperature reached 150-200 ℃, shortening the hot pressing time. The higher the temperature, the shorter the time required for hot pressing. The limit of the heating temperature is appropriate not to pyrolyze the wood. In the hot press, in addition to curing the adhesive, the high temperature can also increase the plasticity of the wood, which is convenient for compacting the slab. Studies have shown that increasing the temperature and increasing the water content of the surface shavings will produce plastic deformation under pressure. If the hot press does not heat or the heating is insufficient, higher pressure is required to achieve proper contact of the shavings.

Heat also affects the polycondensation process of the adhesive. While heating the glued material, the adhesive is subjected to heat, the internal frictional force begins to decrease, and the viscosity drops to a minimum at 60 ~ 80 ℃, thus improving the contact between the glue and the raw material. This flow time is very short, as the temperature in the slab increases, the internal friction of the glue increases rapidly after a few seconds, and finally the adhesive is fully cured. When the internal friction starts to decrease, the surface tension of the adhesive also decreases, making the surface adjacent to the material to be wetted easily, and the adhesive liquid is also easily transferred from this surface to another surface. Heating the slab causes water and glue to move under vaporization, diffusion and capillary action, and melts and diffuses on the surface of all glued materials.

So what happens to the temperature inside the board after heating?

After the slab is hot pressed, that is, starting from the opening of the press, the temperature of each layer inside the slab changes differently at different hot pressing temperatures. Take the temperature change inside the ordinary particleboard after hot pressing as an example. The internal temperature change of the slab is not only determined by the slab's own factors, such as the density of the slab, the thickness of the slab, and the moisture content of the slab; but also due to changes in external conditions, such as ambient temperature, air flow speed, etc. Knowing the law, it is convenient to make full use of the residual heat in the board and solve the actual production problems. For example, shorten the hot pressing time, use the appropriate time for the post-curing of the adhesive; control or reduce the free formaldehyde in the board; arrange the cooling board time and process reasonably.

The above is the function of the temperature of the hot press. If you have any questions about the machine, please contact us at any time. Our company can provide you with a complete set of plywood production solutions according to customer needs.